Lizbeth Meredith is an award-winning author living in Chattanooga, Tennessee. Her memoir has been adapted as Stolen Hearts: The Lizbeth Meredith Story on Lifetime Television.

Lizbeth is also a speaker and online teacher who enjoys coaching and consulting part-time, a fun addition after three-decades career serving crime victims and offenders.

In her off- time, Lizbeth enjoys movies at the theater, talking with podcast guests at Persistence U with Lizbeth, and Facetime chats with her adult daughters where they may or may not discuss The Real Housewives.

Lizbeth Meredith is an author, speaker, and online teacher who recently relocated to Chattanooga from her home in Anchorage, Alaska. Her memoir, Pieces of Me: Rescuing My Kidnapped Daughters published by She Writes Press is now adapted for television as Stolen Hearts: The Lizbeth Meredith Story on Lifetime Television (spring 2022 release).

But her story didn’t begin there.

As a young child from a chaotic home punctuated by ineducation, family violence, and parental kidnapping, Lizbeth couldn’t wait to become an adult to create a brighter future. Instead, in her mid-twenties, she found herself living in a domestic abuse shelter in 1990 with her two small daughters. It took everything and then some to get a degree in journalism, learn to parent instead of control, and get a job at the very battered women’s shelter that had previously helped her.

Living large on ten dollars an hour in 1994 as the sole supporter of her children, Lizbeth discovered that there were unintended consequences of leaving abuse when her former husband kidnapped their daughters on a court-appointed visitation and left the country, four years after their initial separation.

And there, the real struggle began.

Today, Lizbeth is 57, holds a Master’s Degree in Psychology and a Bachelors in Journalism. She’s worked as a domestic violence advocate, a child abuse investigator, and retired after 20 years as a juvenile probation officer and supervisor, where she trained staff on trauma-informed care, the Adverse Childhood Experiences Study, and Mental Health 101.

Lizbeth found that working in the field was as instrumental to her own well-being as therapy, and her experiences at home and work inform her writing of essays, fiction, and non-fiction. She discovered that crises and trauma can refine rather than define us, and enjoys speaking on recalibrating, resilience, midlife issues, and all things persistence. She hosts a weekly podcast, Persistence U with Lizbeth, where her guests share their own stories of grit. A part-time coach, Lizbeth works with new authors on book marketing, and mid-life women who no longer wish to eat life’s leftovers.

When she’s not working, Lizbeth adores books, movies, coffee, and time alone as well as with friends and family. She’s embraced solo-budget travel after her kids were grown, and  hopes to make it to the last continent before her 60th birthday.

For updates on the podcast, books, courses, and appearances, hop onto Lizbeth’s email list or find her at Facebook 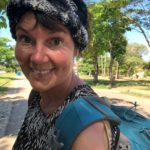 Lizbeth Meredith is a writer, speaker, and online teacher who recently relocated to Chattanooga, Tennessee from Anchorage, Alaska.  She holds a bachelor’s degree in journalism and a master’s degree in psychology.

After working as a domestic violence advocate and child abuse investigator, Lizbeth spent two decades as a juvenile probation officer and supervisor before retiring.

Today, Lizbeth teaches courses online and works as a community educator on domestic abuse and child custody matters at a Tennessee nonprofit. She’s a speaker at conferences and on podcasts on topics like domestic abuse, the unintended consequences of leaving a violent relationship, resilience, trauma-informed care, choosing to work in the system that failed, empowerment, and all things marketing and memoir.

Her own memoir, Pieces of Me: Rescuing My Kidnapped Daughters  won five awards, is currently optioned by Cineflix for television adaptation, and is available in audiobook format. Her book is available wherever books are sold. Her shorter essays and pieces have been in Alaska Magazine, The Feminine Collective, and Jane Friedman’s blog, as well as A Girls Guide to Travelling Alone by Gemma Thompson (UK).

Lizbeth has been featured in:

Request Lizbeth for an event, speaking engagement or appearance at Liza8m@gmail.com

Opt-in to receive the latest updates from Lizbeth