What do you call the stuff an editor cuts from your book? Lost footage or wordage? Outtakes?

I was knee deep in the most recent edits when I realized one of the main characters was all but stripped away. A darling that author Anne Lamott would describe as being killed in the revision process.

My memoir is now present tense. It had been much too long and clunky, and needed to be shaved down. Still, it was about C.H. Rosenthal, or Hank as his friend knew him.

Never before or since had anyone had such a reassuring effect on me. Below is my old introduction to Hank.

And then there was her husband.

Heather’s second marriage was to a much older gentleman named Hank Rosenthal. Hank looked more mature that his sixty-two years indicated. He was in perfect physical condition but it appeared that each of his life experiences had been carefully mapped on his face, like a Norman Rockwell painting. His ears and nose were far too large for his square head.   Hank had retired a few years earlier from his job as chief lobbyist for Arco in Alaska.  He was as understated as his wife was gregarious, and he was happy to enjoy his behind- the-scenes role as her supporter.  He adored cooking and caring for his home. He loved his wife. And, as luck would have it, he learned to love me.

Hank became like a father to me after my first trip to Greece. I was thirty years old, but in his company, I felt like a safe and loved little girl.

Hank made Sunday dinners, and often invited me to join him and Heather at their home with any number of their family or friends. It wasn’t the food, but the soothing effect Hank’s presence had on me that motivated me to attend.  He would share stories from his childhood. He teased me mercilessly as if I were his own child. “Hi, Guy!” he said, greeting me with a sideways smile, “That extra weight you’ve put on looks great on you!” And he made me believe, if only for a moment, that everything would turn out fine eventually.

He didn’t always think so himself, Heather told me later. One night after Sunday dinner, he decided to share his worries with Heather.

“Liz is young,” he told his wife. “She can start over. Maybe what she really needs to do is move on. Find a nice guy. Get married. Have some more kids,”

“Fuck you, Rosenthal,” Heather told him, leaving Hank to finish the dishes alone.

To my face, Hank continued to be reassuring.

“Mother always told me not to worry,” he said. Worrying is really just borrowing tomorrow’s trouble.”

He was right.  A dose of Hank was always good for helping me regain perspective. 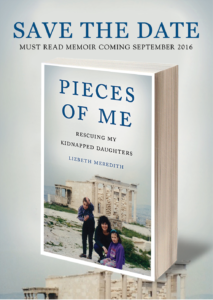 Pieces of Me: Rescuing My Kidnapped Daughters will be published in five months. Hank helped me with a chapter in the first draft, but sadly passed away in October of 2003.