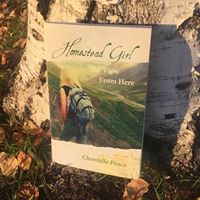 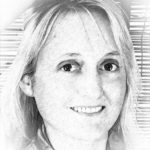 This week, I’m happy to have Chantelle Pence as my guest author.
I first met her at a farmer’s market, and with our common interests in writing and Alaska life and our kids, we developed an easy friendship. I so enjoyed her book Homestead Girl, and now follow her writing in the local newspaper. Now, knee-deep in writing a second book, Chantelle reflects on her process of writing and connecting with readers.
When did you know that you wanted to share your stories in the form of a book?
It sounds kind of hokey to say that I wanted to write a book since I was a child, but it’s true.
After I read The Outsiders when I was about ten years old, I had a distinct thought: “I could do this…” I thought it again after reading The Prophet and after I finished Jonathan Livingston Seagull, which was my favorite book as a young child.

I knew that I loved writing, but I didn’t pursue it as a serious craft until I was in my early thirties. My education and professional background is in Human Services, not journalism, so it took some time and permission-seeking from others, before I finally told myself, “If you want to be a writer, just write!” I had notebooks and computer files full of writing, but when I shared my first piece with friends and family, I was trembling. Any offering of writing is an act of vulnerability, and most of my stories are very personal in nature, so it was scary.

I discovered that my writing resonated with people, beyond my friends and family, when I started submitting pieces to the Anchorage Daily News as well as to local and regional publications. I began getting feedback and encouragement to keep writing. I even received phone calls, letters, and emails from some state officials after certain essays were published in the paper. At some point I decided that I had earned the right to write a book. I didn’t have a degree in journalism or creative writing, but I had a body of work that I could stand on. I applied for, and received, an Individual Artist Award from the Rasmuson Foundation, which funded my first book project.

What was your favorite part  of Homestead Girl to write?
I don’t know that I have a favorite story, but I love the process of story making. One essay in Homestead Girl describes the feeling I get when a story is ready to come through. I liken it to a “joik”, a style of song that is native to the Sami, the indigenous people of Northern Europe. They don’t joik about a person, place, or thing. They joik it into being. It’s not a retelling, it’s a conjuring. I don’t even bother sitting down to write, unless I feel the story coming. It’s not a thinking process, it’s more like feeling the spirit of the story and giving it a body. Sometimes a story will flit about for days, or weeks, before it’s ready to come through. When it does it’s a great relief, and frees me up for other things…until the next story starts whispering.

What surprised you the most about writing and publishing nonfiction?
I am pleasantly surprised that I don’t get more hate mail! I get a bit, and it’s to be expected because some of the subject matters that I explore are controversial or uncomfortable. My intention, always, when I write about things that are not so pleasant (a recent sexual abuse article comes to mind), is to shine a light and offer solutions. I also write from the ground level, not up on a pedestal. I promised myself a long time ago that if I were going to write about sensitive subjects I would put myself right in it, and share my own failings, not just point out problems and act like I’m perfect. I had to get over the desire to want to be liked or to look good.
Generally, people appreciate the honesty in my writing. I know it’s not always easy for my family or community when I share certain things, but I do believe that the truth sets people free.

Your book has done very well, and I’ve noticed your articles that appear in the local newspaper reference your book, increasing its visibility. You have also done some out-of-the-box promoting.
What promotional advice would you give prospective author about publishing his or her book?
You have to put it in front of people.  Your friends and family will buy your book, but others won’t unless they know about it. I go anywhere that will have me (book fairs, farmer’s markets, book clubs, craft fairs, etc.), but I don’t think of it as marketing. I think of it as an opportunity to meet new friends and readers. This has truly been the best aspect of the book release. I did a Books and Brew tour that was really fun! I was able to do readings and pop-up book signings at some of our Alaskan breweries, and met really fantastic people. That’s what it’s all about for me.

How can readers best connect with you?
Go to www.chantellepence.com and fill out the form on the Contact page.

While de-cluttering my bedroom recently, I found an old magazine that reprinted my first published article in 1993. First posted in Alaska Women Speak, later in The Radical, I wrote it about the epidemic of domestic violence. 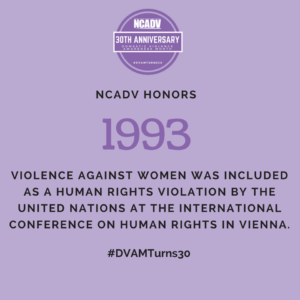 How novel it seemed at the time to be writing about what was then considered to be a deeply personal matter. Pre-O.J.Simpson trial. Pre United States Surgeon stating that domestic violence was (then) a leading cause of injury to women in certain age brackets.

It was truly wonderful to be a part of making a positive difference. Along with the other domestic violence advocates, I got to give a series of presentations and trainings. Trainings for judges, police officers, and employers. Presentations for clergy and public assistance workers, concerned citizens, and eventually for doctors, once it was confirmed how many victims presented with mental and physical injuries that needed attention. No matter who our audience was, we encouraged people to get a little nosy. “Ask when you see injuries if you have a private moment with the possible victim. Address concerns in a non-judgmental way.” Easier said than done.

Below is from the Maine Coalition to End Domestic Violence.

Initiating this conversation can be difficult. Some tips to help:

If your friend begins to talk about the abuse:

Just Listen: Listening can be one of the best ways to help. Don’t imagine you will be the one person to “save” you friend. Instead, recognize that it takes a lot of strength and courage to live with an abusive partner, and understand your role as a support person.

Keep it Confidential: Don’t tell other people that they may not want or be ready to tell. If there is a direct threat of violence, tell them that you both need to tell someone right away.

Provide Information, Not Advice: Give them the phone number to the helpline (1.866.834.HELP) or to their local domestic violence resource center. Be careful about giving advice. They know best how to judge the risks they face.

This past year, I’ve had the chance to join domestic violence advocates in a number of community presentations since publishing my memoir.

Abuse in relationships is still far too common, and well over 1,000 women every year die because of it in the United States alone. Millions of kids are still being raised in homes witnessing domestic violence.

It’s natural to wonder Are we making a difference?

Then I had coffee with my friend Ruth. She used to manage the Abused Women’s Aid in Crisis (AWAIC) shelter I worked at 20 years ago and we left our jobs around the same time. Now on blood thinners, Ruth bruises like a banana. 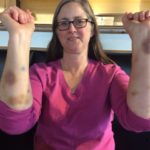 “Does anyone ask you about the bruising?” I asked.

“All the time,” she told me. She’s been asked by friends and strangers alike if she’s okay. “Even the groundskeepers downtown have asked me if I was safe.”

So Happy 30th Birthday to Domestic Violence Awareness Month, and to all who’ve stuck their neck out to ensure we’re making progress.

I encourage you all to become a part of the conversation and part of the solution when opportunities arise. Or donate to or volunteer at your local shelter.

As a side, I’m grateful to my friends at AWAIC for honoring me for sharing my story. Without them, there would be no story. 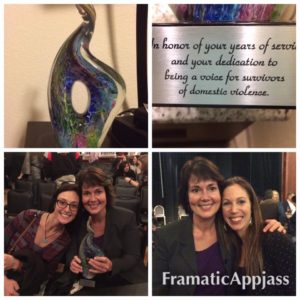