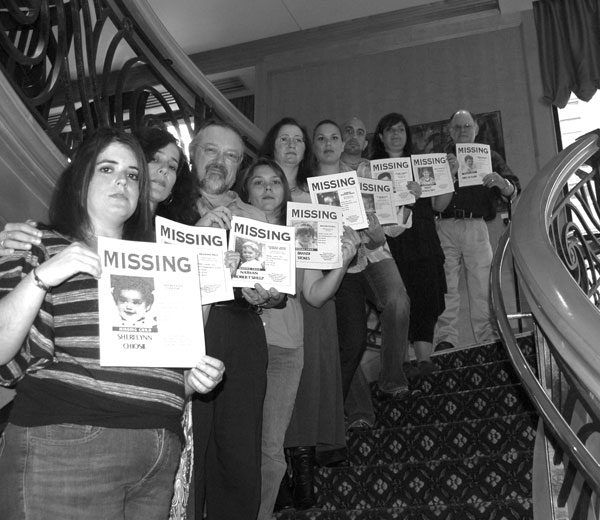 This week, I found a gem.

I’d been reading an article published by the U.S. Department of Justice that linked to Take Root. Take Root.org (1-800-ROOT-ORG) is a non-profit designed for adult survivors of child abduction.

I found my tribe at the Take Root site. As a stolen child who later had her own children stolen, these virtual friends were speaking my language. There, the now-adult victims write about their loss of a parent, and the challenges they faced when they were returned to their lost family.
Especially touching was a vignette by a man named Sam M.
Imagine this: You were told that your mother is dead. you’ve lived for years without her in your life. One day someone takes you from your father and puts you in an unfamiliar place and this woman walks in. She looks uncannily like what you remember of your mother but she is older… and your mother is dead.

My youngest daughter was told  I had died by her father when he snatched she and her sister and fled to Greece. When I found her two years later, she looked like she had seen a ghost. I didn’t understand. I thought she should be overjoyed to see me, and I was crushed.
As a parent who recovered stolen children, there were a lot of things I’d wished I’d have known back in the day. Here are a few of the highlights I gleaned from Take Root’s members.

1) Recovering children from an abducting parent feels to the child like a second abduction.

They lose their parent, their toys, their friends, their routine, all without warning. Again. So their joy about being reunited with their parent is quite naturally overshadowed.

2) The lying a child was forced to employ to survive a parental kidnapping does not magically cease when the child is found.

Think about it. A stolen child has to lie to teachers, to neighbors, to law enforcement, and  to new friends in order to start a life without drawing attention to their circumstances, angering their abductor.
Had I known what to expect, I’d like to think I wouldn’t have been so angered when dealing with what I thought was gratuitous untruths. My poor girls.
3) Minimizing the impact of a parental abduction on the victim only makes he/she feel worse about their suffering.
People mean well. But when they say things about my girls’ kidnapping like, “Oh, it was your dad? Aren’t you glad it wasn’t a stranger?” it tends to make my daughters feel like they’re big babies for not being over it.
In truth, when one person a child loves and trusts takes them away from the other parent the child loves and trusts, the impact is life-long.  It’s an unexpected betrayal of trust.

It’s fabulous to have a clearinghouse of information from abduction victims to know what to expect.
This year, more than 1,000 children a day in the US will be victims of a parental child abduction.
Finally, there’s a place for left-behind parents, friends, extended family and teachers to hear what all the struggle to reintegrate will entail.
lameredith.blogspot.com/atom.xml