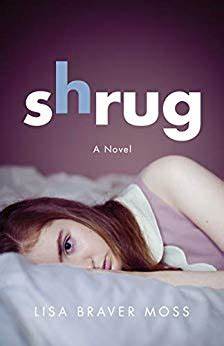 I love a good book, and was honored to provide an author endorsement for this one. Shrug is available to order now!

I’m so pleased to have Lisa Braver Moss as my guest.

What inspired you to write Shrug?

My experience growing up was similar to that of Shrug’s main character, Martha, so that was my inspiration. I wanted to create a coming-of-age story about childhood domestic violence and other trauma. I also thought the wild vitality of Berkeley of the 1960s made a great backdrop for the story. I was interested in the interplay between Martha’s household chaos and that of the world of Berkeley at the time.

How did it influence your writing to be a survivor of childhood domestic violence?

I witnessed domestic violence against my mother, and was a target of it myself, while growing up. I felt chronically outraged by what was going on, and could be quite confrontational (which my father did not find amusing). My appetite for speaking the truth eventually morphed into a sense of urgency about writing Shrug.

Many stories of teenagers show rebels. What made you create a character who’s anything but a rebel?

I would argue that Martha is quite a rebel. Sure, she’s a bit of a goody two-shoes; she wants nothing more than to do well in school and find meaning in her life. And yet, just her being an achiever is radical in the context of her family. She’s contradicting all that’s unconventional at home: negative messages about school, unpredictability, lack of structure, impossible emotional demands, and explosive physical violence. The challenge was to show Martha as a complex, sympathetic character whose rebellion paradoxically takes the form of conventionality.

The family dynamics in Shrug are complicated. In essence, Martha’s father is abusive, but likely the better parent to her. Her mother is a victim, but flees the entire family. What do you hope the reader takes from these imperfect parents?

Yes, the battering father, Jules, turns out to be the better parent than the victimized, histrionic mother, Willa. You see clues of this along the way. I wanted to show what it’s like to have the story’s “bad guy” be more capable of love than the “victim,” Willa. I felt this added depth and complexity to the story.

Your book cover is stunning. Tell us about the process of selecting it.

Thank you! It was one of those situations where there were four choices and it was completely obvious which one was the one. That was also obvious to the publisher, so it was nice that we were on the same page (so to speak…!).

I had expressed to the publisher that I envisioned a kind of wistful look for Martha. I provided a black-and-white photograph that I felt captured that look, and they did a fantastic job of creating the same mood without using that particular photo. I love the design and colors they came up with, too.

Of the three siblings, Martha, Hildy, and Drew, Martha, the middle child, seems to be the mother’s favorite. How does this family role affect her?

Martha is indeed in the unfortunate position of being Willa’s favorite of the three children. I say unfortunate because often in dysfunctional families, “favorite” means “able to be manipulated.” Couched as extra love, favoritism is generally more a matter of extra demands than of actual support. It’s no bargain.

Also, Martha carries such a burden of guilt about being favored that she’s slow to see that she, too is being mistreated by Willa. She’s too preoccupied with Jules’s mistreatment of all of them, too busy propping Willa up, and too busy worrying about her siblings. She also experiences her own suffering at Jules’s hands as secondary to Willa’s suffering. I think many children who see themselves as rescuers (rather than victims) have these same reactions.

This book of fiction brings up very real topics of domestic violence and resilience following trauma. How can storytelling bring attention to social issues and create change?

Whereas nonfiction can offer suggestions, how-to’s, research data, psychological insights and so on, I think fiction is deadly if it’s didactic that way. The subject matter of a novel may include social issues, but the primary purpose of a novel isn’t to create social change. It’s to engage, entertain, and maybe inspire thought.

What fiction can do is make people feel less alone. Those who grew up with domestic violence and the kind of trauma Martha experiences tend to feel isolated and ashamed at some level. But while the circumstances vary, feelings of isolation and shame about childhood difficulties are universal. And those feelings can lift somewhat when one immerses oneself in a world of fiction that addresses that terrain. If readers identify with Martha, they can feel less alone. That in itself does create a shift in the reader, and I think we can call that change.

You can connect with Lisa Braver Moss at lisabravermoss.com or on Facebook. Her book is available for ordering wherever books are sold.