I’m honored to have author Gretchen Cherington as my guest today.

Gretchen’s memoir, Poetic License, is getting terrific buzz well before publication. In it, she recounts a very private side of her well known father, Pulitzer Prize-winning poet Richard Eberhart, and her own journey to find truth and understanding.

I love the title of your book. Please tell us how you came up with it.

Thanks! The book went through a number of iterations over the nearly twenty years it was in gestation. Each stage came with a different title, but none of them really felt right to me. A few years ago, when I rewrote the end of chapter 12 in which I’m reflecting back on why my father—a generous and kind and beloved man—could have molested me when I was asleep in my bed at seventeen, I named a few potential reasons seen in the below excerpt.

“Years later, I would wonder, was it my budding breasts that night? The intoxication of Anne Sexton? One too many bourbons?” and then concluded, “None of those mattered. It was just my father’s poetic license, the license privileged men have long taken from the women around them.” The phrase appeared out of the blue and I knew it was right. Confirmation came from Brooke Warner at She Writes Press when she signed me: “We love the title!” It’s an obvious fit given my father’s literary medium.”

How did you research your book?

I was blessed and cursed with a huge load of source material. My father’s literary archives at Dartmouth College contain over 55,000 letters to and from nearly every notable writer of the twentieth century, most of whom frequented our houses while I was growing up. It includes boyhood and adult journals of his and correspondence from his parents’ generation. I was drowning in information! The intense research phase played out over a five-year period in my mid-forties while I was also recovering from divorce, building my consulting company, falling in love for real, and shepherding my kids into young adulthood. I was able to mull over my impressions and experiences with letters in his collection and check my own memories with factual data. Those letters between Dad and Robert Lowell, Robert Penn Warren, Anne Sexton, Allen Ginsberg, Robert Frost, James Dickey, and others, are fascinating in itself and I sometimes got distracted! We don’t write that kind of letter anymore, so it’s an especially important  collection and Dartmouth made access easy.

Ha! Best, now that I’m “retired” is when I have several days or weeks (or months) of really unscheduled time and I can dive deeply for a few hours a day into my writing and spend hours outdoors, before returning for a couple hours of writing, late afternoon. During the ramp-up to publication there’s none of that kind of time. I miss it and look forward to it as I dive into the next book. While raising my kids and running my consulting business, I seized opportunities on airplanes, in hotels, and in airports. When flying globally, I tried to book an couple of days on my own—I remember one special four-day weekend in Sitges, Spain after work in Barcelona, where I booked a cheap hotel with a view of the Mediterranean and wrote all morning, walked the beaches and explored galleries in the afternoon. Writing is essential. Top of mind. So, I simply carve out time for “butt in chair.” We each find a rhythm and when we do, even if for an hour, it’s bliss!

When did you know that you couldn’t not share your story?

After he died, I said to his doctor (who knew my story) that while I didn’t need others to change their experience of my father, I was no longer willing to change mine. That’s when I knew. It was my story and my time. It was for others struggling to comprehend any really complex relationship. It took me this long to get it right.

Memoirists are sometimes accused of writing for revenge. How would you respond to that? Did you learn anything about your relationship with your father as you wrote?

Revenge was never on my mind. Perhaps, because of my father’s stature and fame, I felt especially concerned about exposing his flaws. There were periods of anger and shame as I tried to figure out what I thought and felt by writing things down. But the very hardest part of good memoir writing is to clearly own our emotional truth. For me, that’s always been a humble truth, built from long self-examination and fair-eyed viewing of the people who’ve impacted me. Revenge was not the book I wanted to write. And, in my view, it’s too easy. Seeing and owning the complexities of my father, was what was true and then to claim all of that on the page. Lengthy interviews with some of his best poet friends, especially Richard Wilbur, Jay Parini, and Donald Hall, validated this. I learned so much about my relationship with Dad which I could never have learned without all that research and talking to his friends.

Connect with Gretchen here or buy Poetic License wherever books are sold. 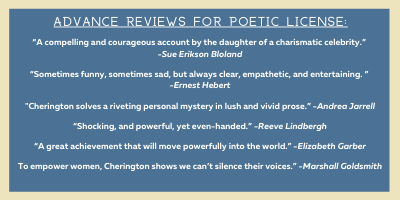