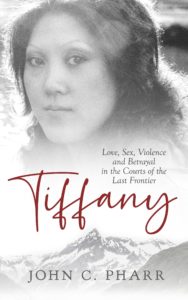 I was wonderfully surprised when a quick visit to revise my will turned into a lively conversation about my attorney’s foray into the writing life.

John Pharr showed my his two beautiful books, but one in particular held my attention due to current events in Alaska. Tiffany: Love, Sex, Violence and the Betrayal in the Courts of the Last Frontier was was replicated on a local level with Alaska’s Attorney General just as Pharr’s book was being released.

I’m so pleased to have author John Pharr as my guest.

Q: I’ve known you solely as a lawyer. What inspired you to start writing?

A: I never stopped. Reading and writing have been the sine qua non of my existence since I defied my parents and read with a flashlight under the covers late at night. (They could not figure out where the burn marks on the blankets came from.) Reading has meant so much to my life. Usually attributed to Benjamin Franklin, “only a fool learns everything from experience.”

Q: How did the idea of writing Tiffany come to you?

A: From an article about a middle-aged judge in another state, old enough to know better, who became obsessed with his law clerk and lost his judgeship as a result.

There were a number of intriguing aspects:  A middle-aged judge who threw away his judgeship, and who knows what else, in the fruitless pursuit of a woman who plainly was not interested in him; a hapless victim whose response was not free of moral ambiguity in that she accepted $26,400 in cash and gifts. And when she finally reported him, the judge tried to reinterpret the record with lies so pathetic that they would not do justice to the average street criminal who appeared in his court.

I sent away for all the records available from the judicial disciplinary proceedings, and the lawsuit she filed against the court system for sexual harassment, so his texts to her were taken from real life.

Transplant the facts to Alaska, add embellishments, plots, and sub-plots, and I had a lot of fun. I hope the result is not only entertaining but enlightening as well. 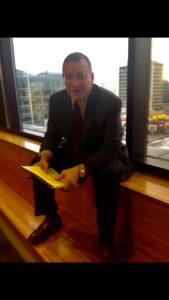 Q:  You managed to research, write, and publish two books while working full-time in your law practice. How did you find the time?

A: In the evenings I sit in my easy chair and research and write rather than watch reruns of Seinfeld. It’s not at all a chore, but a wonderful hobby, in that it’s at once detachment and immersion. This is kind of embarrassing to admit, since to most people research and writing would be scary boring. It’s not like skydiving, bungee jumping, or developing a cure for the common cold.  Indiana Jones, I ain’t.

Q. How did you select the method of publishing?

A: There are so many tools available these days. I was lucky to come across a Canadian business called Ebook Launch, a retired Canadian Air Force pilot and his two sons. They format your Word manuscript and get it ready to publish on Amazon KDP, and other platforms.

Q: What are you working on next?

A: I’m in the research stage of a dissection of the 2012 Apple v. Samsung jury trial.  Apple sought $2.5 billion in damages for infringement of iPhone and iPad patents, and was awarded a little over $1 billion. The trial transcripts and entire case file are available on-line.

What drew me was reading that Samsung’s lawyers ran out of time to present their case.  I would never want to happen to me in a misdemeanor trial, much less when billions are at stake and the whole world is watching.  And what does a trial look like when there are unlimited resources? This would be directed to lawyers of course, but there are aspects that might appeal to a wider audience.

So far it will be called “Cell Wars,” although I would like to come up with a word for “cell” or “phone” that rhymes with “Star.” (Spar Wars? Cell-u-lar Wars? No.)

I’m also revising a manuscript called “Peccadilloes of the Greats.” It’s about…peccadilloes of historic figures. “Honest Abe” Lincoln was once sued for fraud; Eisenhower was almost discharged from the Army for drawing an allowance he was not entitled to; Chief of Staff MacArthur kept a teenage Filipino concubine; and Truman put his wife on his Senate payroll with no duties. Still looking for more of these factoids.

I’m bursting with ideas for when I retire and have the time and money, which will be never. Lawyers take their experience to the grave, and consequently it seems like every new lawyer has to reinvent the wheel. I’d like to record my observations from a lifetime of day-in, day-out law practice.  Worthy or unworthy, my experiences will live on after me, for whatever lessons a newby might draw.

In addition, I’d like to look into some of these sensational cases in which murder convictions were thrown out based on modern DNA. Were these people really innocent? What was the evidence, and why were they convicted to begin with?

Q: Where can people find your books?

A: Amazon Books, print and ebook.

So, has he inspired you to write? Have you ever thought about writing a book?

Next month is National Novel Writing Month. Many new writers turn into authors with the motivation and support provided here. It costs nothing, and the time is right.

Have a good week.