The Covid Cleanse/What To Do When Clutter Sparks Joy

It’s well over a month into the worldwide hunkering down. How are you filling your time? 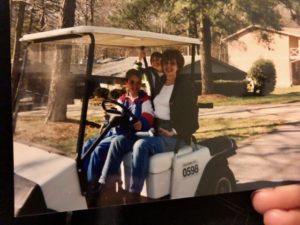 First meeting with my beautiful Aunt Wanda in 1998.

It’s been a perfect time to pare down the embarrassing quantities of photo albums and old letters of the past forty-plus years that I’ve saved.

To motivate myself, I imagined my adult daughters rummaging through my things after I’ve one day passed. What would they want?  Which pictures will mean nothing? Were there any letters that if, later found, would cause me to turn over in my grave if they ended up in their hands? 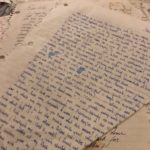 I’d read a while ago that dieters and anxious people in general do better without so much stuff. I’m an anxious dieter, and the idea that I’ll be one day trying to sell or rent my place in its current condition was a  lot.

So I did what the pros recommend, and dumped my things on the floor and began reading and sifting.

And reading some more. 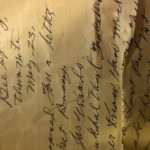 I found a wonderful letter from college classmates. A nice one from my mom. A ton of letters of support from people who wrote the Greek courts when my daughters were abducted. Poems from an old college flicker. (A crush that amounted only to one month of beautiful poems, not a flame.) And a fantastic letter from my dad, after my lawyer friend Ira located him for me in my twentieth year.

My dad was seventy then. We hadn’t seen one another since I went missing as a toddler, taken from Kentucky and eventually transplanted to Alaska after a brief stint in Louisiana. We were about to meet face-to-face in June of 1985. I’d read this letter from him so many times since he died in 1995, yet how had I not remembered this part? He eloquently captured what most every left-behind parent feels after reuniting with their kidnapped child.

“I have missed so much. Your growing up years. Your pigtails. Your first day at school. Your high school prom and the first date and more. I hope the good Lord will Give me 18 years more to get to know the little girl that I always thought hung the moon.”

This memorabia reminded me of how much love and adventure has been squashed into the last five and a half decades. How much the rawness of the past was eventually replaced by excitement for the future.

How could I let go of these cherished items? I worried I’d retain everything. Then I read from the reassuring words from the fabulous organizing consultant and author, Marie Kondo.

“Discarding is not the point; what matters is keeping those things that bring you joy. If you discard everything until you have nothing left but an empty house, I don’t think you’ll be happy living there. Our goal in tidying should be to create a living environment filled with the things we love.”–Marie Kondo of Tidying Up.

In the end, I’ll confess that I listened hard to Marie Kondo’s advice. And I got rid of maybe twenty letters, organizing the rest and slimming down my picture collection by four albums.

The rest simply sparked too much joy.